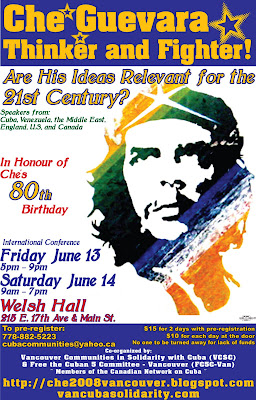 TO PRE-REGISTER:
778.882.5223
CUBACOMMUNITIES@YAHOO.CA
$ 15 for 2 days with pre-registration
$ 10 for each day at the door
NO ONE TO BE RETURNED AWAY FOR LACK OF FUNDS
Make cheques payable to
"Vancouver Communities in Solidarity with Cuba"
Send to:
PO Box 56067
1st Ave RPO, 1690 Nanaimo Street
Vancouver, BC, Canada
V5L 5E2
PROGRAM


~*~ Conference will be followed by a Cultural Night with Dinner, Music and Dancing! ~*~

Why Che Conference Now?
Read the below section in 3 languages!

Che Guevara: Thinker & Fighter!
Are His Ideas Relevant for the 21st Century?

Ernesto Che Guevara has become a revolutionary icon in representing the continuity of revolutionary socialist theory and practice. His legacy has been an inspiration in the dynamic search for ways and means to confront imperialism as the decaying process of the capitalist profit-driven system continues. Che Guevara’s revolutionary conduct has become the standard and the norm of every true revolutionary. Vancouver Communities in Solidarity with Cuba (VCSC) is organizing this first International Conference in Canada on Che Guevara’s contribution to the revolutionary cause. The conference will feature speakers from Cuba, Canada, the US, & the Middle East. 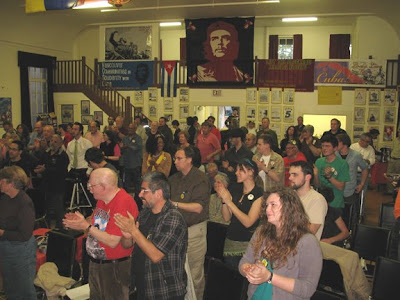 Che Guevara: Thinker and Fighter!Are His Ideas Relevant for the 21st Century?

On June 13th and 14th, 2008, Vancouver Communities in Solidarity with Cuba (VCSC) and Free the Cuban 5 Committee – Vancouver, member groups of the Canadian Network on Cuba, hosted Canada’s first ever international conference on the ideas of renowned Latin American revolutionary leader, Che Guevara. “Che Guevara, Thinker and Fighter! Are His Ideas Relevant for the 21st Century?” opened on Friday night with over 120 people in attendance throughout the evening. Activists and intellectuals from around Canada, Cuba, Venezuela, the US, and the Middle East came to discuss the importance of Che’s ideas today in a series of dynamic workshops and presentations.

The conference opened Friday night with MCs Tamara Hansen, coordinator of VCSC and executive member of the Canadian Network on Cuba, and Colleen Glynn, an organizer with VCSC and president of the New Democratic Party (NDP) Richmond. They welcomed everyone and explained how the conference would explore the importance of Che’s ideas in the 21st century, 40 years after his death, as well as exploring Che’s ideas on building a new human being and a better world.

The first evening began with an opening ceremony by Indigenous Cost Salish Elder, Kelly White, who said a few words about how Che inspires the struggle of Indigenous people and gave an offering of tobacco to the 5 guest speakers who came to the conference from out of town. The featured speaker on Friday was Isaac Saney, a professor at Dalhousie University in Nova Scotia and the author of the wonderful and educational book, “Cuba: A Revolution In Motion”. Isaac’s dynamic presentation tackled the interconnection between Che Guevara and the Cuban Revolution.

The second day of the conference began with the film, “Che: Love, Politics and Rebellion” which was the first Cuban-made documentary on Che. Tamara Hansen opened up the day and read a greeting to the conference from the Cuban Embassy in Ottawa.

The first talk of the day was written by John Waller, the Coordinator of the Pastors fro Peace Caravan to Cuba, which was read by MC Aaron Mercredi, an organizer with VCSC), because John Waller was unable to travel to the conference. John’s theme “Che and the New Human Being” perfectly outlined the ideas and issues covered in the day’s program.

With over 200 participants throughout the day, and with exciting presentations from a number of prominent speakers, the conference brought Che’s ideas and legacy through a variety of exciting workshops. Samira Amndan, Diplomatic Attaché at the Venezuelan Consulate in Toronto, spoke impassionately about Che’s impact on the Bolivarian Process in Venezuela today during her workshop themed “Che and Latin America.” Her talk was followed by talks from two special guests visiting from Cuba. Irma Gonzalez Salanueva and Jairo Rodriguez Hernandez spoke on ‘Cuban Youth and Che’s Ideas.” Irma is a young student leader at the University of Havana and the daughter of Rene Gonzalez, one of the 5 Cuban Heroes currently held in U.S. prisons. Irma is also a leader of the Union of Young Communists (UJC). Jairo is a student leader in the UJC in Havana. Jairo is also the Vice President of the University Students Federation (FEU) in Havana Province. They spokeabout how Che’s example and ideas are reflected in the young people of Cuba today, who are actively part of the Cuban Revolution.

The following workshop, “Are Che’s Ideas Relevant for Today?” was presented by Walter Lippmann, who traveled to the conference from Los Angeles, California. Walter is a long-time social justice and Cuba solidarity activist since the early Vietnam anti-war movement in the United States and Editor-in-Chief of Cuba News. He spoke about his experience getting involved in Cuba solidarity and how in today’s world, which is marked by social and economic crisis, Cuba and Che’s ideas stand out as examples follow.

Ali Yerevani, political editor of Fire This Time Newspaper for Social Justice, spoke next in the workshop called “Che in the Battle of Ideas, and What We Can Learn From It Here in Canada,” and emphasized that Che and Cuba’s example needs to be reflected in the struggle for justice and equality in Canada.

The final workshop of the conference was titled “Internationalism, Volunteer Work, and Che’s Ideas” and was presented by our special Cuban guests, Irma Gonzalez Salanueva and Jairo Rodriguez Hernandez, who spoke about how many of the projects that Cuba is known for, such as the internationalist doctor missions and volunteer work, are the result of Che’s ideas in Cuba today. They also spoke about how the five Cuban Heroes are a product of Che’s ideas, as they sit in US prisons for defending their country against US-sponsored terrorism.

Throughout the day, discussion among participants was lively and dynamic. Participants were able to draw on their own experience, learn from those of others, and reflect on the importance of Che’s spirit and the necessity of his ideas of a better and just world. The conference was truly a success and attracted many new people from different communities, as young as 14 and as old as 78 years old. “Che Guevara: Thinker and Fighter! Are His Ideas Relevant for the 21st Century?” is the first conference of its kind in Canada, and beginning of many more to come, as Che’s ideas are only gaining more and more relevance in the world today.

excerpts from:
Notes on Che Guevara conference in Vancouver, B.C.

Some weeks ago I was invited to participate in a conference held here in Vancouver, B.C., Canada to mark the 80th birthday of CheGuevara. Here are a few personal notes to supplement the detailed comments already presented on the CubaNews list by Tamara Hansen, the coordinator of the sponsoring group, Vancouver Communities inSolidarity with Cuba. I won't repeat what she said since it can be read here. It's quite detailed and has photographs, by the way:http://groups.yahoo.com/group/CubaNews/message/86865

It was a quite successful event, in my view. Attendance exceeded projections for the main speaker, Dalhousie University professorIsaac Saney who flew all the way from the other side of Canada (Halifax) to give an exciting and enthusiastic presentation about Cheand the current state of the Cuban Revolution. Isaac Saney's remarks were particularly well-received. Hopefully he will be write about the points he discussed. There was an almost full house with over a hundred present for the Friday night session. Even more than that came and went during the sessions on Saturday which went from early in the morning past midnight with dance education, home-prepared food, and dancing wrapping up the day's activities.

Saturday featured a series of films, workshops and numerous presentations, including remarks on two panels by young Cubans who came to the event: Irma Gonzalez, a member of the Union of Young Communists at the University of Havana, where she is studying psychology. Jairo Rodriguez, who is an officer of the University Students Federation (FEU) in Havana also spoke. For Rodriguez, who is also an accomplished guitarist and singer, this was his first time outside of Cuba. Samira Amndan, diplomatic attache of the Venezuelan Embassy in Ottawa also spoke. The gathering was opened up by an Indiginous Canadian woman in a special ceremony which politically conscious people here use to express their own solidarity with Indiginous peoples and their struggles.

The two Cuban visitors were welcomed with the greatest of enthusiasm, which they also returned to their hosts and the audience. These young people (He's 26, she had her 24th birthday on Sunday), weren't like what you might be expecting of visiting dignataries. They also picked up chairs, participated in the cleaning up of the meeting hall afterwards, and stayed, not in any fancy hotels, but in the homes ofconference organizers. Samira Amndan, the Venezuelan diplomatic attache, a woman in her late 20s with an extensive left political history going back to before the Chavez administration, just had a baby four months ago, but she didn't hesitate to pick up cooking implements and prepare a Venezuelan dish to share with some of the conference activists.

The gathering also drew a raft of activists from left organizations and tendencies, most of whom participated in the animated political discussions which followed the presentations which were given.

Ali Yerevani, Political Editor of the Canadian magazine called FIRE THIS TIME, gave a presentation about what he described as the sense of self-satisfaction which he sees infecting too many on the Canadian political left. Members of the audience joined in discussing his points as many were interested in the issues he raised an how the political left could make itself an effective force for social and political progress in the country. Yerevani is a most interesting man, with a long history going back to Iran where he got involved in politics before the Iranian Revolution of 1979. He's lived abroad since then, including a stint in Europe, another in the United States where he was in the Socialist Workers Party for some years, and here in Canada where he has lived for about a decade.

The day after the conference, many of those present went out to support the border crossing by the Pastors for Peace Caravan to Cuba which crossed over from Canada to the U.S. on Sunday. During the following week the Cuban visitors participated in print and electronic media interviews, and took a long ride (over four hours, each way), to the small city of Comox Valley on Vancouver island) to make a presentation and take questions from a local group, the Comox Valley Friends of Cuba.

Hopefully I didn't forget any major details, but it's been quite an enjoyable time here in Vancouver, where I'm going to hang out for awhile longer. Oh, I did a short radio interview one morning as well on the local Co-Op radio station, which is something like Pacifica and other non-commercial stations in the United States.

The weather here is a bit nippy, which makes me appreciate even more the distance from Los Angeles, where I'm told the weather is sweltering this week.